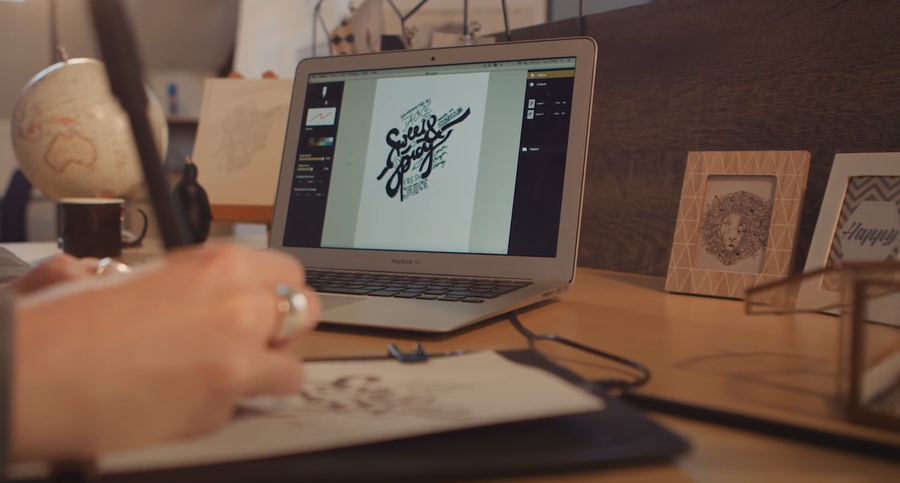 If one were to summarize the art of calligraphy in a few words, it would be the ability to make a handwritten manuscript, from the traditional writing, particularly polished, by adding creative effects. In the history of art, we know especially the calligraphies of the Far East, with the Asian calligraphy, like the Chinese writing or the kana and the kanji of the Japanese writing, as well as the Islamic calligraphy, with the Arabic writing, using alphabets resembling ideograms. But this style of calligraphic writing, which is part of the graphic arts, cannot be reduced to Japanese or Oriental culture. For a long time, the Latin alphabet was also used in the Western world by calligraphers to write books reserved for the elite. Calligraphy courses, where the different styles of medieval Latin writing were taught, as well as the appropriate gestures, were often reserved for monks who filled their libraries with religious books with ornamentation and medieval illumination. Calligraphy was then part of the real art trades, and we could find many traces of it, from books, to paintings or engraving. Today, calligraphy is no longer taught as part of learning to write, but this art is still very popular, and many contemporary calligraphies, inspired and mixing traditional calligraphies, are created every day. However, one should not confuse calligraphy, typography and lettering. If calligraphy remains the way to write in an elegant way, in cursive or script, typography will be the art of creating a new alphabet dedicated to the current writing, while the lettering will be more similar to the graphic design, with additions of texture, colors or visual effects in three dimensions for example. 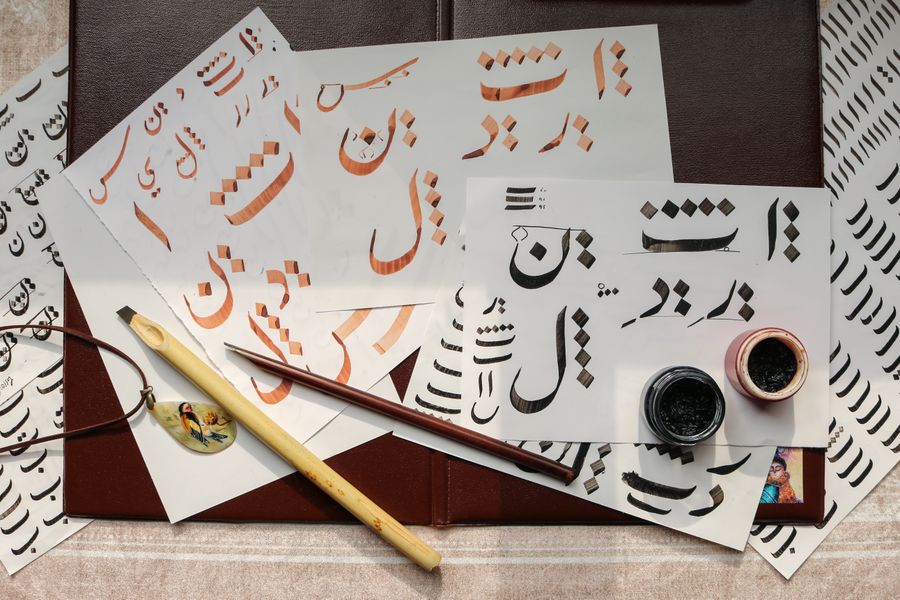 Classical calligraphy includes traditional writing fonts. Historically, the lettering was particularly elaborate in order to create valuable manuscripts and texts. It includes Hebrew calligraphy, Arabic calligraphy, as well as Japanese calligraphy and Chinese calligraphy, each ideogram of which is a work of art. While all of these styles are still taught in countries using these types of pictorial alphabets, Latin calligraphy, which although no longer taught in class, has a great history related to printing and medieval religious culture, will also be found. Gothic and Celtic writing are without a doubt the best known examples with their recognizable fonts and handwriting. This classical calligraphy is based on very precise standards, which must be learned in the pure tradition, during calligraphy classes. 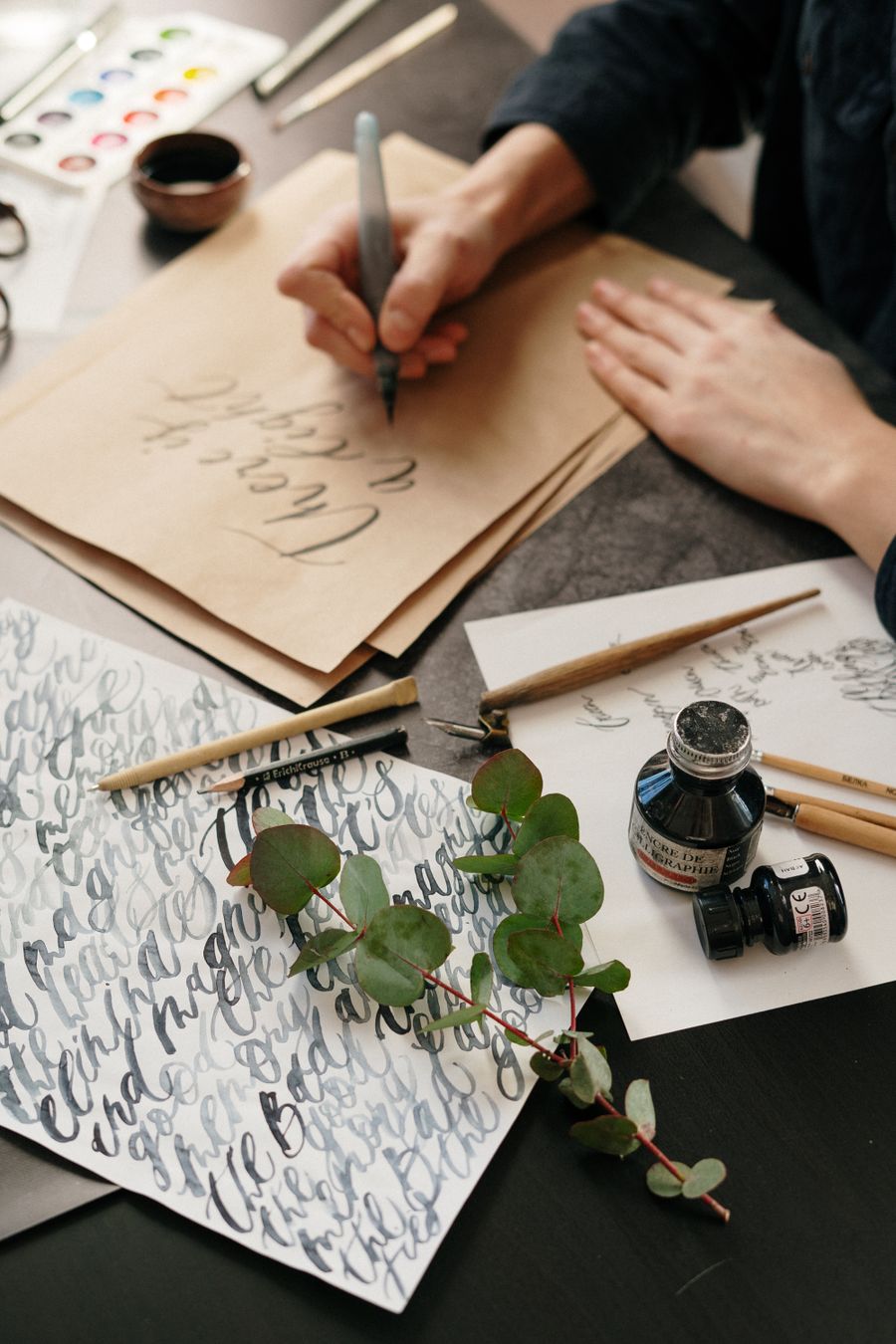 Modern calligraphy is much freer than classical calligraphy. There are no specific constraints, and graphic designers can go to great lengths to create the most beautiful handwriting possible. In modern calligraphy, we are dealing with a form of line art inspired by different scripts and different techniques. One can be inspired by Japanese and Oriental writing, or by Western or Middle Eastern cursive writing, in order to give free rein to one's imagination, and thus create lettering, or why not a new typographic form, inspiring, beautiful to look at and pleasant to read. Your inspiration will be your only obstacle to your creativity.

Some tips for learning calligraphy

Have an adequate position

The first thing to know when you want to start calligraphy, is that the position plays a very important role. Be well installed on a desk, and especially, when you decide to draw your trace, keep the wrist very static. A wrist that moves will give an unstable line, with small vibrations. The goal of calligraphy is to obtain clean, precise strokes without any hesitation. So don't hesitate to practice in order to get the necessary confidence to get a perfect stroke.

Pay attention to the direction of the lines

A simple technique to vary the style effects is to have a thicker or thinner line. When you draw your letter, depending on whether you move your pencil, brush, felt-tip pen or pen up or down, the thickness of your line will vary. In the upward phases, your line will be thinner and finer, while in the downward phases, you can obtain a thicker line, and you can vary this thickness by playing on the force applied to your pencil. Practice varying these parameters to give style to your writing.

As a novice, the best way to progress is undoubtedly to try to copy existing typography cleanly. This is the first thing your teacher will have you do in your first introductory calligraphy class. While filling in notebooks with letters of the alphabet in different fonts with a simple pencil may not be the most enjoyable, it will allow you to gain confidence in your handwriting movement, and to achieve a regular handwriting, with clean and sharp strokes. There are many courses and workshops to help you improve your style and movement, and it will take patience to achieve perfection.

Have fun with letters, be creative

Calligraphy remains a practice where the graphic designer must above all have fun. When you do modern calligraphy, whose codes are unrestricted, test several typographies, add serifs, play with the height and space between letters, add gradients, an arabesque here, illuminations there... Full and loose writing styles will have a completely different effect than a tight writing. Don't hesitate to copy the same word, in the same font, changing some elements like the slant or adding decorative elements on the capital letters for example. There are as many calligraphic styles as your imagination will allow. It is a pictorial art that requires an open mind, and even if you are not satisfied at first, improvement will come with time.

The essential equipment to start calligraphy

There are countless tools available to practice calligraphy. If traditional calligraphy requires specific tools depending on what you want to achieve, such as different nibs (the metal nib of the fountain pen or the quill pen), calamus (a reed cut into a spike), bamboo or different brushes, modern calligraphy offers greater freedom of action. You can use the supplies mentioned above, but you can also use pens with different stroke effects, choose a felt-tip pen with a thicker or thinner tip, or any other tool that allows you to mark the paper. Some people even use the wash technique (a single color that will be diluted), or special inks to give stylish effects to their calligraphy. It's up to you to be imaginative, but for beginners, a set of markers and a few liquid ink pens and pens can be a good start to your first calligraphy techniques. Crayola pens are a great way to get started, as the line can easily thicken or narrow depending on the force applied when drawing.

Paper is also a very important consideration when practicing calligraphy. The beginner can use simple white paper with squares to practice varying the size of the characters and the spacing. Those using wet techniques such as ink and brush can use a thicker paper with a higher density (such as Canson paper). The more traditional calligraphers can vary the papers, and use Chinese paper (rice paper or silk paper), or parchment to make authentic calligraphies on aesthetic media. For modern calligraphy, you are free to choose your medium, it is up to you to test the one that will suit you best for your project.

Liquid ink calligraphy is traditionally the origin of this practice. There are countless types of ink depending on the style you wish to study. If the most known are the traditional black ink or the Indian ink, one can also turn to a pen with liquid ink, or to inks containing pigments which will give another dimension to your handwriting. Some people even use watercolor paints, Chinese paint or Japanese paint, or acrylic paint, in order to achieve more aesthetic calligraphy elements, close to painting. Of course, when using liquid ink, don't forget to invest in an inkwell and a penholder which will be your best allies. And why not go digital?

Digital technology can be a real asset when you want to learn or improve your skills in the art of fine calligraphy. Indeed, thanks to the graphic tablet, coupled with software such as Photoshop, Illustrator, Gimp or Inskscape, you can study all types of writing and typographic styles, from Gothic characters to Persian writing or Chinese art, among others, without having to invest in countless supplies that would cost you a lot. In fact, the brushes offered by your graphics software allow you to reproduce numerous styles of brushes, pencils, and tools, which are perfect substitutes for traditional elements. All you need is a well-made pen and your drawing tablet to try out all these writing styles. However, a graphic tablet without a traditional screen can be a hindrance to learning, especially when you are a beginner, as the hand-eye coordination between the tablet and the computer screen (you don't look at your hand while writing) is difficult at first, and doesn't allow you to fully concentrate on this art that requires great precision. You can then turn to a graphic tablet with a screen, whose price is often excessive, or to a hybrid tablet, like the ISKN Repaper, which will allow you to put a sheet of paper on the active surface of the graphic tablet, use your favorite pencil or felt-tip pen thanks to a magnetic ring that retranscribes all your movements on the screen, in order to write in a stylized way, with the comfort of paper, while benefiting from the tools offered by your graphic software. And once you're comfortable, you can switch back to screenless mode with a Repaper Stylus.

As we have seen, calligraphy is a subtle art that took root several millennia ago. Whether you practice classical or modern calligraphy, learning how to draw, how to use the tools and the different techniques will be an obligatory step in creating your most beautiful lettering. After that, it only remains for you to use your imagination to propose innovative typographies, with the most beautiful calligraphy.

The history of drawing

Drawing has undergone many evolutions over time. Learn about the history of drawing and improve your creativity by drawing on the past.

How to learn to draw?

Learning to draw is a long process. Discover the tips to progress and learn drawing in a fun and motivating way!