Many applications have emerged in recent years to draw on the computer, directly on his mobile device, such as a smartphone or a multimedia tablet. However, to make quality drawings, a drawing tablet is almost essential, and it is necessary that it is compatible with the most popular applications, and that it offers specific features to draw effectively. Discover the best drawing applications on Android and IOS according to your needs and which hardware is the most suitable for drawing on these Google Play or App Store apps.

As we have seen, among the best-known generalist software for digital drawing, Adobe stands out with Adobe Fresco. This application, which is only available on the iPad, allows you to draw and edit images with tools that are similar to the PC and Mac versions. In addition, it will support both a raster image and vector images. Continuing on iOS, Procreate is definitely the ideal software for producing quality drawing via mobile devices. The choice of brushes, pencils and brushes is plethora, and getting to grips with it, thanks to the use of layers, is relatively simple. However, it is not a freeware program, and using it is a cost for the user. On Android, we can turn to Sketchbook, a free and complete application, offering many tools for designers. There are obviously many other applications for drawing, and it will be up to you to determine which one suits you best by trying them out. Some people want to go further, and start creating a comic book, a comic or a manga. Illustrators might be interested in Medibang, to create a drawing using the codes of the most famous comics, or to make a quick storyboard. This application, in addition to being intuitive for novices, allows the easy integration of bubbles, and gives access to tools specific to comics. You can also optimize your layout by breaking up your canvas into several boxes, thanks to a specific option. In the same vein, Ibis Paint X allows you to create a manga drawing with ease. This software offers many options, from the creation of frames (those small dots that are more or less tightly packed, giving shadow effects to the drawings), to effects that transform a photo into a background decoration in the pure manga style. In addition, the many tutorials will allow you to easily draw an image that meets your expectations.

Apps for modeling and drawing objects.

Drawing doesn't only mean making art, by creating large and impressive canvases. When you are a designer or architect, you may also need an application made to allow you to draw an object or a model, with a technical drawing software offering vectorization tools. Since a CAD software like Sketchup does not exist on Android or iOS, we can then turn to generalist applications allowing to make vector drawings at first, or go to more specialized mobile software. Once again, iOS will be better off, with object design apps, allowing to draw vector objects in 3D, like Shapr3D or Sculptura for example. But Android is not left behind with Onshape or AutoCAD Mobile App, this last application being more specialized for architectural projects.

When you invest in a drawing tablet, the manufacturer may sometimes offer free drawing software for mobile devices. When you need to make a quick drawing outside, these applications can have a real interest for the user. Beyond being able to draw everywhere, at a lower cost, avoiding the paid software, this type of "manufacturer" application does not pose any potential compatibility problem with its drawing tablet, and often offers sufficient options to be able to draw sketches that can be exported later on a computer, in JPEG or PSD, among other formats. In the case of the Repaper Studio application for the Repaper drawing tablet by ISKN, for example, the toolbar will be lighter than for other applications, but its operation is more intuitive, and the brushes, pencils and brushes offered in the application will be relevant to the pencils and pens you will use with your drawing tablet. The management of each layer is also present, and offers you to create a more complex and worked drawing. A tutorial is hardly necessary as the use of an application like this is simple and effective, and will satisfy the vast majority of designers. Obviously, each manufacturer has a different application, and they will be more or less developed, and will offer additional features or not (such as video recording, or speedpainting, available on Repaper Studio for example), depending on the attention that will be paid to his mobile software. It is therefore important to have a drawing tablet that can be adapted to other applications, to make the most of it. 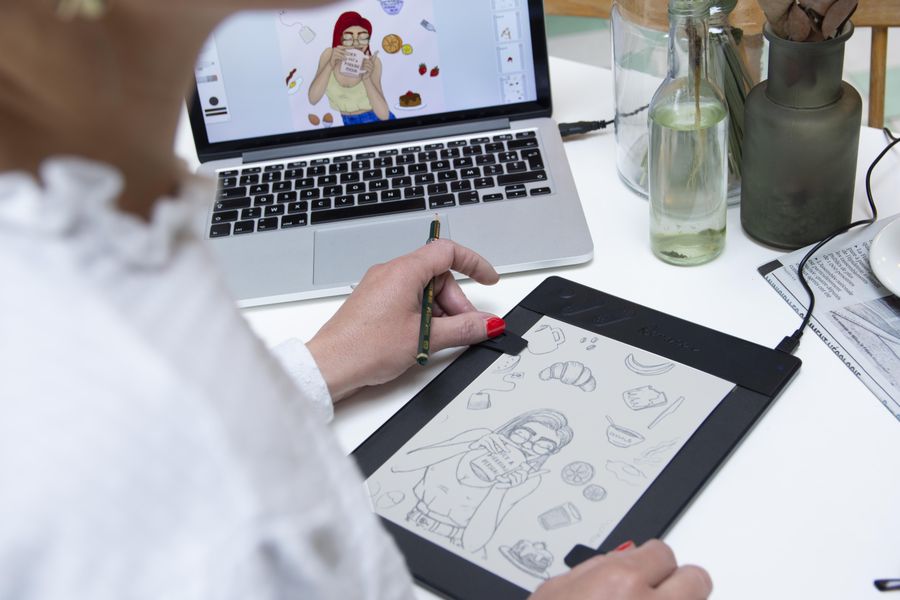 Which drawing tablet to use with a phone or a multimedia tablet?

Some people will tell you that you can create drawings directly from the screen of your phone or tablet, such as an IPad, IPhone, or Android device. Only if you want a drawing surface that allows you to draw accurately, with a grip that allows you to draw with your hands in a quality manner, the beginner drawer, as well as the experienced designer, will be better off with a drawing tool such as a drawing tablet. The choice of your device, among all the drawing tablets on the market, will then be made according to several major specifications. Indeed, these drawing tools, for designers wishing to use them with a smartphone or in addition to a multimedia tablet, must be nomadic, have a compatibility with the majority of drawing software, as well as with smartphones and multimedia tablets, be easily associated with the latter, and they must also be comfortable to use to allow beginners to learn to draw in the best conditions. We can therefore exclude tablets with a screen, which are too expensive compared to the battery life offered, and not very suitable for outdoor use.

To meet the required specifications, there are still drawing tablets without a screen, which can be interesting to work on a drawing application for smartphones, but which find their limit in the mandatory use of the screen of the latter to see what you are drawing. Between the small size of the screen, and the hand-eye coordination, not always obvious for novices, sketching with a drawing tablet without a screen can quickly become complicated in order to obtain all the precision that is normally sought with this type of tool. However, there is a tablet format that allows you to do digital graphics and painting with the precision of traditional drawing, while using the brushes and tools provided by your favorite Android or iOS app. With a hybrid tablet, like the Repaper by ISKN, offering to work on a sheet of paper, directly on the drawing area of the drawing tablet, and with a standard pencil equipped with a magnetic ring transmitting each movement of the latter, directly to your graphics device, drawing becomes very natural and precise, as if you were on a sketchbook. Just connect it via Bluetooth to your mobile device, for Android or iOS, and engage your favorite drawing program to make a graphic creation with a simple pencil, taking advantage of all the necessary tools provided by your application. If you want to make quick retouches and edit your drawing, no worries, you can also use it as a graphic tablet without a standard screen, thanks to a digital pen, with the help of the screen of your smartphone or your multimedia tablet. 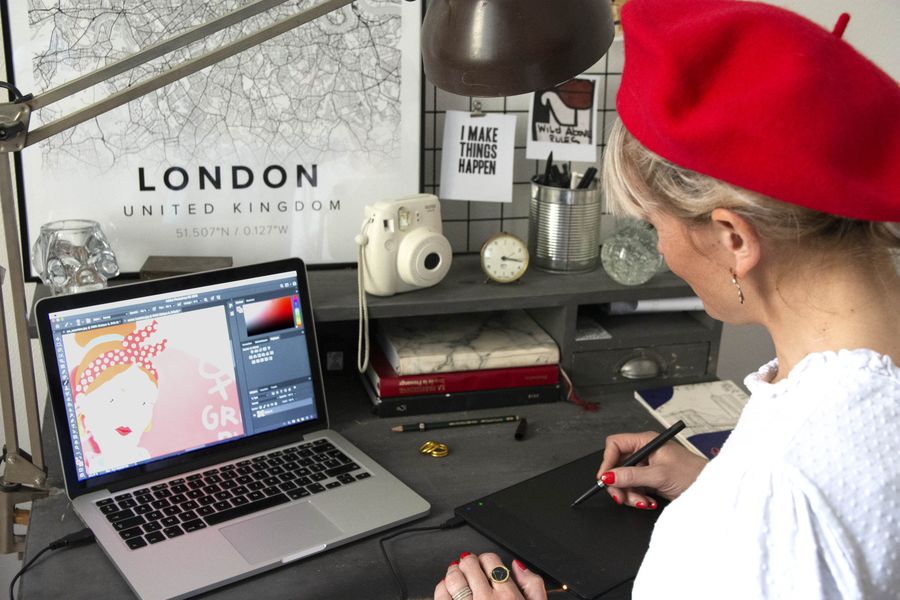 Windows and MacOS VS Android and iOS?

If you are used to drawing on a computer, under Windows or Mac OS, you may wonder what the difference is between the graphics software you usually use on your computer, and the drawing program adapted for Android or iOS. Applications for drawing and illustration are relatively new on mobile devices, especially on Android, and it is still difficult to find mobile versions of the best-known software on the computer, such as the vector drawing software Adobe Illustrator, the free software Gimp and its vector equivalent Inkscape, but also for more specialized applications, such as Corel Draw for digital painting or Photofiltre for photo editing. If there is a free smartphone version of Adobe Photoshop for Android, it is only an ersatz, and only functions that allow you to edit your photos, as Instagram might offer, are available. So we are far from what we are looking for when we talk about drawing applications, and we often have to turn to lesser known applications, really adapted for mobiles and tablets. However, iPads are a little better provided, the Adobe suite offering a mobile version with the characteristics of their biggest software on the Apple store. Other software, such as Clip Studio Paint, also take the step of digital mobile, offering a smartphone and tablet version of their program, often easier to use, and which offers the designer to find his favorite layers and tools, as well as export and backup functions. If working on a cell phone allows to create a sketch from a distance, the proposed applications remain nevertheless less complete than what can be found on a PC, and should only be a complement to computer drawing, which can be finalized at home.

As we have seen, more and more applications adapted to mobile devices are emerging. Whether your application for smartphones and tablets is paid or free, you must choose it above all according to your needs, because you will not have the same expectations if you do Digital Painting, where an application using pixels will be more suitable, or 3D design, where you will need a program that allows you to vectorize your drawings, and that will offer you to model them in three dimensions. The choice of your drawing tablet will also be important, and having an alternative to just rendering on the small screen of your smartphone, such as with a hybrid tablet, allowing pencil drawing on a sheet of paper, can be a real plus to draw more accurately.