Discover How do you draw a tattoo?

How do you draw a tattoo?

Drawing your own tattoo can be an excellent idea; the design will be permanently inked on your body, so it’s great to have something 100% personal. However, making your own tattoo design requires a certain amount of knowledge in graphic design, the history and different styles of tattooing, as well as anatomy and the way the body moves. High-quality appropriate materials and creativity are also required when it comes to designing the perfect tattoo.

A brief history of tattooing.

Before designing your own tattoos, knowing the origins of the art form can help you navigate the different styles. Getting a tattoo has had many meanings throughout the ages, and having certain parts of the body tattooed has long given indications of ethnic origin, social rank, or even certain punishments. The art of tattooing was, for a considerable period of time, used to indicate membership in or rejection of a group, before taking on a more decorative role in recent times. The perception of tattooing has also been very different in different parts of the world over the years, and it is important to choose your tattoo design carefully, as it may have a different meaning in some parts of the world. In Polynesian culture and among the Maori tribes, tattooing was primarily a way of defining oneself and telling one's story, with each design having a particular meaning. In Maori tattooing, the part of the body tattooed defined, among other things, one's rank and status progression within the tribe. In Asia, tattoos were primarily a symbol of protection from spirits, but they also defined the social standing of those they adorned. In Japan, however, the meaning of 'tattoo' has changed over time, with tattoo art often being favoured by the 'Yakuza' or by the lower social classes. Tattoo artists are still frowned upon today, and they cannot practice freely without an appropriate diploma, while the Japanese style is popular in a variety of countries. In the West, religions banned tattoos for a time, reserving them to mark criminals and social outcasts; however, they made their comeback at the end of the eighteenth century, at which point they were proudly sported by a vast array of noblemen, before becoming popular within all sections of society, from the most influential celebrities to your everyday Joe Bloggs. The indelible ink of the artist's needle has thus become a trend in Western countries, and today there's even a World Tattoo Festival held every year in Paris. 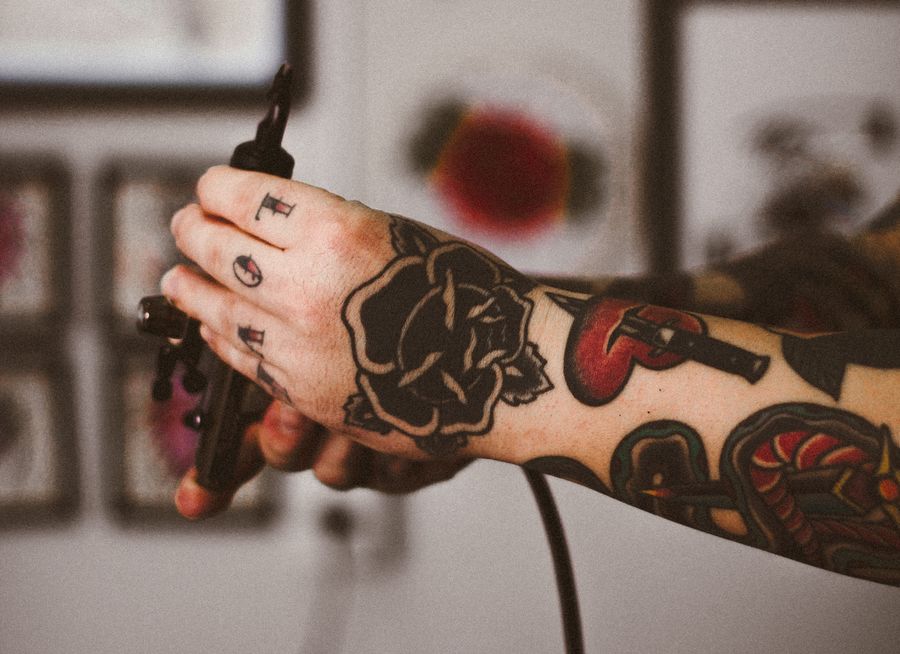 Drawing your tattoo: DIY job or leave it to the professionals?

When getting a personalised tattoo, the choice of design is key; and, to have a unique design idea, you need to distance yourself from the common designs that we see all over the place. Creating an original tattoo from scratch could be the solution. If you do a good job and you choose the right tattoo artist (it’s not a good idea to ink your design on your own skin), you’ll likely have a great result. However, making the kind of design you’d expect of a reputable tattoo parlour is no mean feat and requires a great deal of skill. From drawing to inking, the art of tattooing requires expert knowledge of the discipline itself, the different pigments to use, as well as the human anatomy. Tattoos are for life, so there's no margin for error. So, it's essential to understand the movements of each part of the body, and to adapt your tattoo ideas accordingly. A design for the torso would thus be quite different from one on the neck, biceps, thigh, or forearm. The surfaces, movements, and use of each of these components of the human physique require the designer to adapt their sketches to each individual body part. Whether it's your first tattoo, or if you want to cover up a mistake, it's for all these reasons that it's best to choose a professional tattoo artist to create your design, so you don't end up with something you regret. If you have the right equipment, however, you could always try a temporary or semi-permanent tattoo. The discreet and simple nature of these special temporary inks means that dip your toes in the water without risking the drama of a failure.

What equipment is needed and what are the limits when it comes to designing your own tattoos?

Ok, so you've decided you're going for it. Aside from technique and the knowledge of tattoo art, a successful drawing requires adapted materials that enable you to realise the best sketches. Working on a computer is essential: you’ll need the right graphic design software and drawing tablet to create the most beautiful tattoos. Originally, in order to best adapt to each person’s body, the tattooist would take a photo of the part of the body to be tattooed and use tracing paper to create their design over it to ensure accuracy. But this technique wasn’t without flaw, and in the digital age, layers from a vector application such as Illustrator or Inkscape easily replace this outdated method. Beware, in order to use this software, you’ll need a suitable graphics tablet, and for a designer who isn't used to using graphics tablets, this can quickly become a big obstacle. Using a graphics tablet that combines paper and digital drawing, such as the ISKN Repaper, allows any designer to imagine creating their own tattoo, drawing directly onto a sheet of paper with their favourite pencil, without having to deal with the confusing hand-eye coordination of looking at the computer screen while drawing, or using a pen, which can feel entirely unnatural. As tattooing requires a high degree of precision, it’s really important to feel comfortable when putting your work on paper (and into software). Another obstacle to consider when creating a tattoo is intellectual property rights. Be careful not to copy or be 'heavily inspired' by a design of another tattooist or artist. You could risk being sued for copyright infringement, on a permanent tattoo. If you want to design your own tattoo, you'll need to know the main types. Among the most famous, we have traditional tattoos. This includes all ancestral tattoo styles such as Polynesian tattoos, tribal tattoos, henna tattoos, mandala tattoos, and Japanese tattoos, among others. The traditional tattoo is packed with a plethora of different meanings and has an appeal that still makes it a very popular choice today, despite the fact that it is sometimes over-modernised and loses its meaning, as is the case with tribal tattoos.

This style of tattoo is simple and extremely popular. The objective is to ink one or more handwritten elements, such as an inspirational phrase, a memory, or a date of birth in a font stylised by the tattooist. With all the fonts available today, the possibility of adapting the writing endlessly, and the opportunity to combine lettering with another tattoo style, lettering tattoos will be in demand for a long time to come.

Realism is a style of tattooing that requires a true mastery of classical art. Often in black and white, the realistic tattoo is distinguished by its high level of technicality; the precision of the lines and the grey shading have to be perfect in order not to end up with a result that could easily be described as grotesque. Realistic tattoos often depict humans and animals, and creating a realistic sketch for a tattoo requires advanced drawing skills. 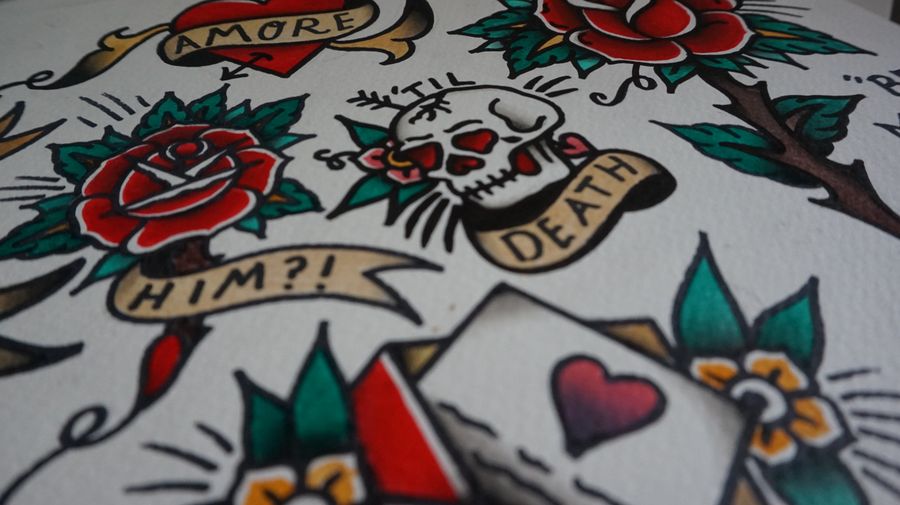 A final, somewhat catch-all category can encompass all other tattoo styles. Graphic and artistic tattoos are usually desired with a purely aesthetic goal in mind and can include engraving (a design that would mimic the style of carved wood), tattoos with ubiquitous geometric shapes, ornamental styles sometimes seen stretching across the entire back, the 'biomechanical' tattoo representing large structures with industrial elements, or a mix of all of these, depending on the designer's tastes and inspiration. Graphic tattoos know no limits and give free rein to the imagination.

Tattoo drawing is a lengthy process that requires practice and numerous modifications to the sketch in order to obtain a perfect result adapted to your body and a design that combines precision and technique. To do this, arming yourself with the right tools and learning the specifics of the industry is essential to achieving your goal. 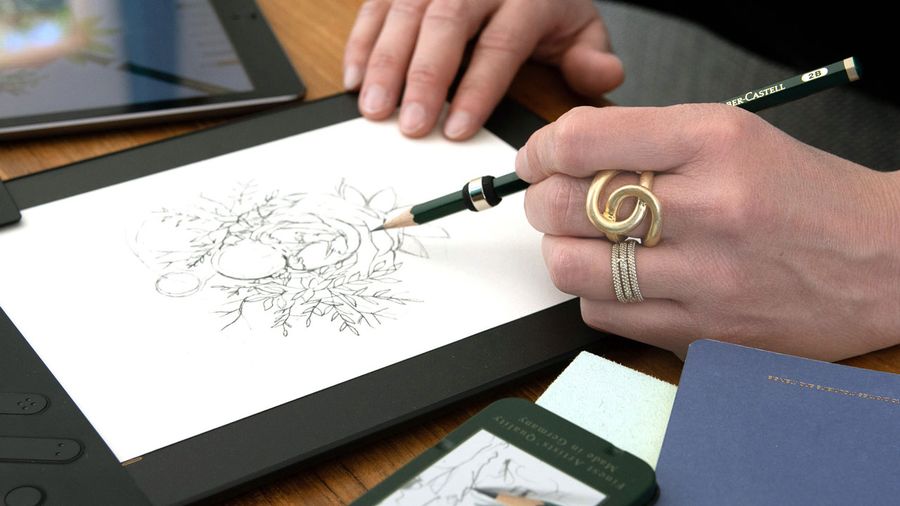 How to draw a logo?

Discover thanks to our tools and tips, how to create an effective and striking logo for your customers or for yourself.

Learning how to draw a character is something that may seem obvious, but beginners are often faced with a disappointing result when they start not to copy a model, but to make their own creation.
United States United Kingdom France España Deutschland Italia Europe