Resources How to draw animals?

How to draw animals?

Drawing animals is often one of the first drawing memories as a child. But when we dig a little deeper, we quickly realize that it is difficult to draw our favorite animals in a realistic way. Indeed, their great diversity often makes us confused, and the result is often not up to our expectations. By following these few tips, you will be able to start drawing animals more confidently, and in the long run, succeed in your artworks.

No matter what animal you draw, there are a few basic tips.

Knowing how to draw on the theme of animals can quickly become complex, given the number of species present on Earth. Unlike the human body, which is relatively similar in structure, whether it is a large, corpulent man or a small, slender woman, there is a big difference between drawing a giraffe or an octopus for example. However, there is a simple method that is often used when learning the basics of drawing, especially when drawing a portrait or motion figures, that also applies to drawing almost any animal. You can start by drawing simple geometric shapes such as circles, triangles or rectangles, corresponding to each part of the animal, which you then assemble in order to have a well-proportioned base to work with. Once you are comfortable, you can even use this same method with spheres, cubes, cylinders, to give your drawing volume and begin to use perspective. When you start using perspective, don't be too hard on yourself, and draw your lines in a confident manner, even if they don't perfectly respect the geometric laws of depth. Afterwards, analyze your sketch, and do it again, and again. The goal here is to acquire the right stroke, but above all to have fun, without having to do the perfect work the first time. 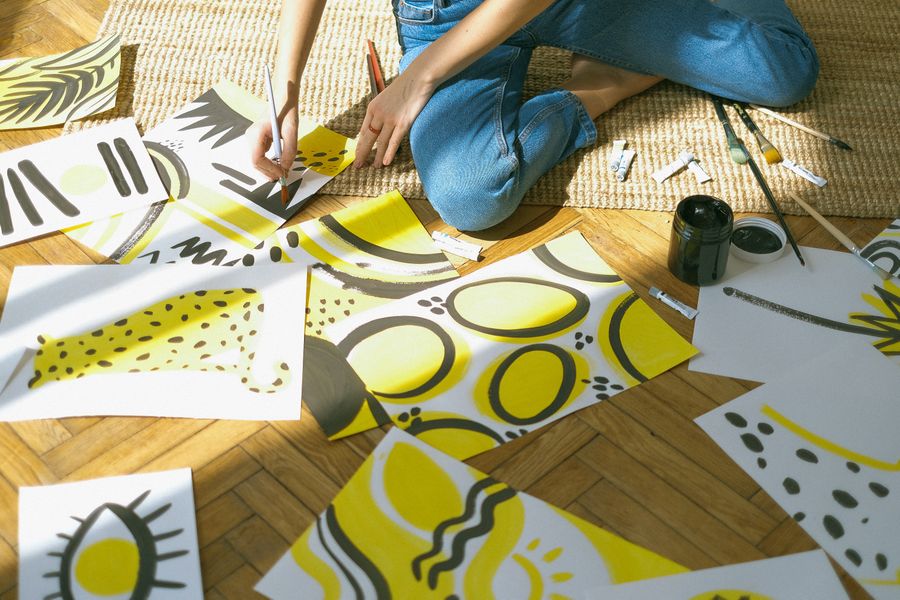 The animals and their particularities.

How to draw a dog or a cat?

When we talk about drawing animals, we often think of our favorite animals, which are pets. Whether it is to draw a cat or a dog, a rabbit or a hamster, or even farm animals with the cow, the pony, the pig or the donkey, the technique will be more or less the same, all these animals being able to enter the category of terrestrial quadrupeds, and having common points. You will notice in your preparatory sketch, based on simple geometric shapes, that the rear, with the croup and the back, and the front, with the withers and the neck, form a kind of wave, while the middle, with the back, forms a slight hollow. Then add to your sketch the head and the legs which must transcribe the movement of the animal. The front legs should follow the movement, while the back legs give it momentum. Finally, once the details of each animal are done, add the fur and the hair by playing on the contrasts, thanks to small hatching more or less pressed according to the darkest or hairiest zones of the animal.

How to draw birds?

Although there are some differences between species, in the same way as for quadrupeds, birds have relatively similar volumes between them, and the legs will be quite similar. Whether it is a duck, an owl or an eagle, in order to draw a bird, we will also start with the volume step. We start by drawing a sphere for the head, then a cube that will accommodate the volume of the body, to finish with the tail and its triangular shape. If you place your volumes well, it will make it easier for you to continue, especially if the head of your model is twisted and not aligned with the axis of the body (which is often the case with birds that we want to draw). Next, add the legs, which are often composed of three fingers forward and one backward, and then move on to the details by drawing each element of your model more precisely. Whether it is with the wings folded or unfolded, the important thing is to make a good preparatory sketch with the volumes, in order to place each detail much more easily later on. 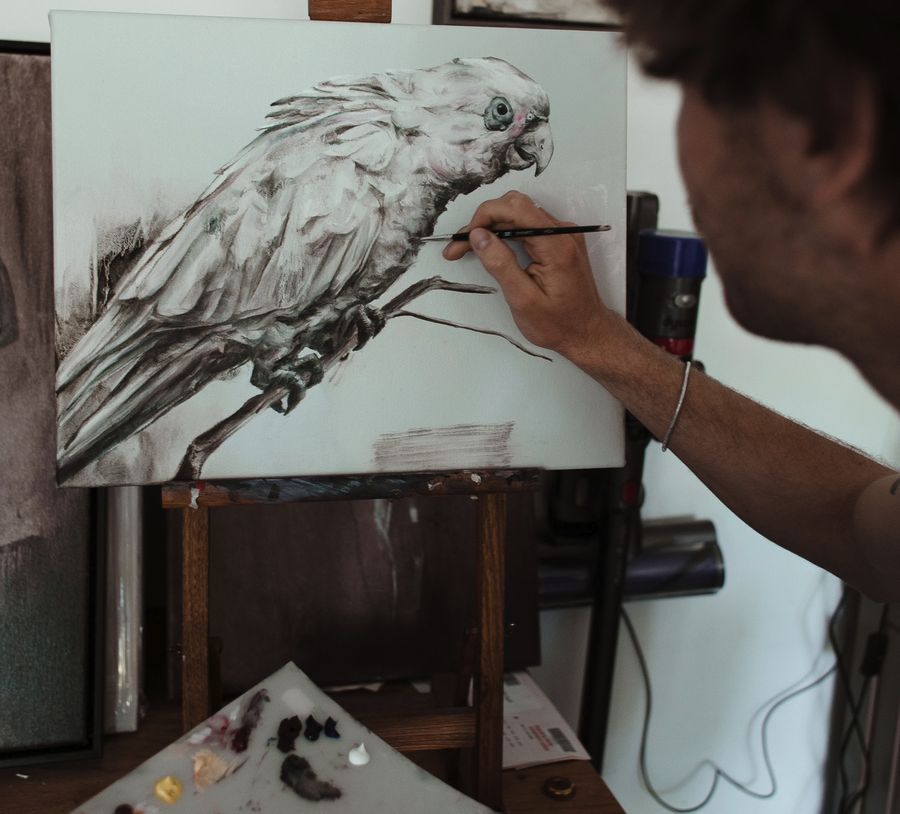 How to draw fish and marine animals?

Marine animals are rightly the easiest to draw when you want to start drawing animals. Indeed, whether it is a fish, a dolphin, a shark, a whale, or even a frog, a snake or a turtle, their anatomy, generally composed of ovals for the main parts, is the easiest to transcribe. In the same way as for other animals, start by assembling cylinders corresponding to each body part ( body, fins, and a triangle for the tail). Then begin by detailing the head, fins, tail, and finally the body. Be careful, the real difficulty for some of these animals is to transcribe the nuances on the scales. So pay attention to the play of light, which is very important for some fish in order to obtain the most realistic drawing possible.

How to draw wild animals, from the forest to the jungle?

In the minds of designers who want to start drawing animals, exotic animals often correspond to the animals of the jungle or the forest that make us dream from a young age. They include wolves, lions, tigers, elephants and giraffes. In any case, if you have already followed the advice previously mentioned, these animals visible in nature, are as easy to draw as the others. For quadrupeds, their morphology will be quite similar to that of domestic animals. Whether it is for mammals, amphibians or wild birds, the important thing is to observe and to be able to transcribe their behavior. In their natural environment, the movements are more subtle, and it is important to be able to capture the look or the attitude that the animal has at that moment.

Indoors and outdoors, have the right tools!

Learning to draw the animal world does not require a lot of equipment for the beginner or not. In order to make your sketches, a simple graphite pencil and a breadcrumb eraser are enough at first. However, nothing prevents you from equipping yourself with a range of pencils with more or less soft leads, in order to explore textures, an important element in drawing animals with their varied fur, feathers and scales, or even to learn how to draw a sketch with charcoal or pastel for example. The ideal is to be very mobile, especially if you want to go outside and draw wild animals, directly in their natural environment. Having the right tools will allow you to find inspiration from nature. 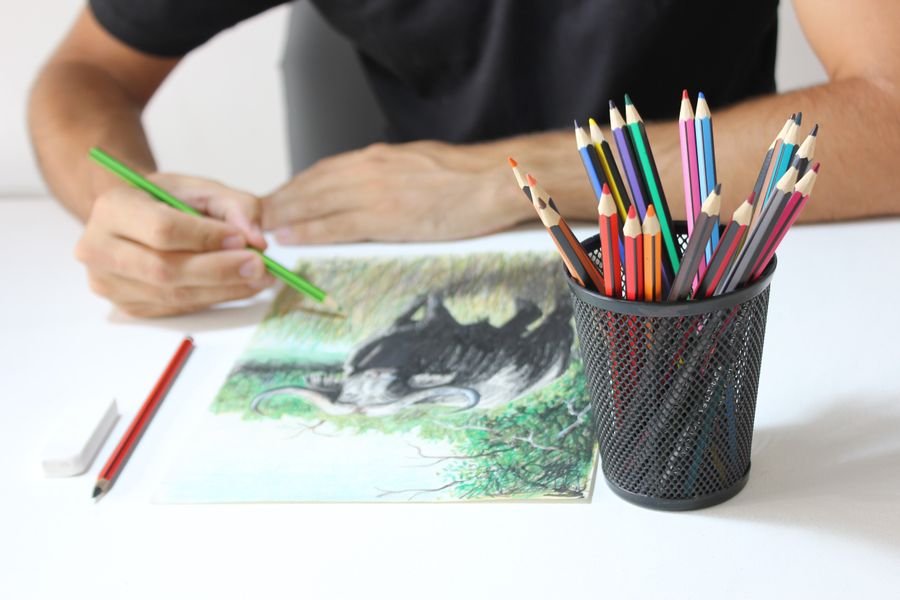 And why not go digital?

In order to draw animals, but not only, many creative people appreciate the use of digital, especially thanks to the powerful tools that graphics software offers. Indeed, thanks to a single tablet, a digital pen and a good drawing software, you can explore styles with, among others, multiple brushes, brushes for a watercolor or oil painting style, or give a stencil effect to your illustrations. Coloring your drawings becomes child's play with the use of different layers and tints, bringing you unparalleled precision. No more need for a wide range of markers and colored pencils to get the desired effect. Moreover, your work will be easily printable or shareable directly on the Internet. However, despite all its qualities, graphic tablets are often shunned by beginners. Indeed, learning to draw easily with these tools is not easy, especially with entry-level tablets without screen, requiring a hand-eye coordination, not easy to apprehend, between the drawing surface and the computer screen. Drawing in the wilderness with a computer is also not an enviable solution for those who want to sketch animals in their natural environment. Tablets with screens could be a solution, but with their high price for quality graphics tablets, they are not the most suitable for beginners with digital arts. However, with the hybrid graphics tablet, a solution is largely possible. These battery-powered graphics devices, such as the ISKN Repaper, allow you to work both indoors and outdoors. Their great advantage is that you place a sheet of paper directly on the surface of the graphics tablet and draw with your favorite pen, equipped with a magnetic ring that instantly transmits every movement of your pen to the tablet's internal memory or to your graphics software. If you draw outside and without a computer, all you have to do is transfer your drawing from the memory to the computer, so that you can work on it directly on your favorite software, thanks to a pen and the screenless mode that the tablet also offers. 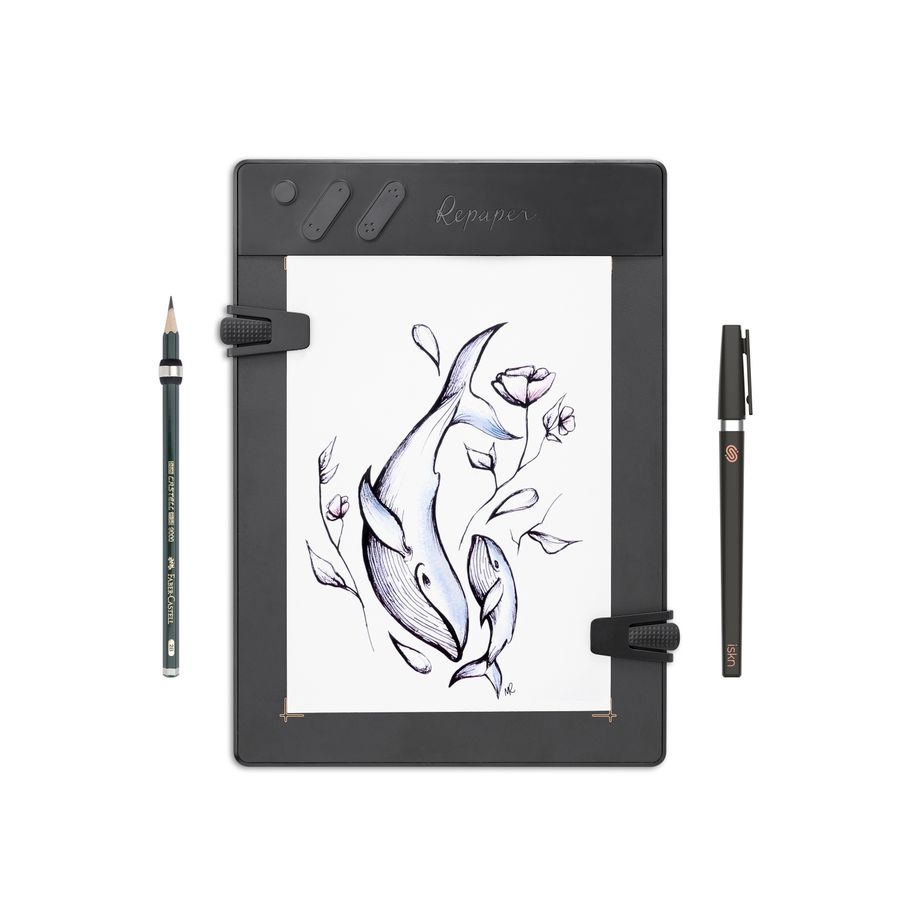 If the fauna is varied and each species has very diverse physiological characteristics, simple techniques allow you to start drawing animals. Do not skimp on your preparatory drawing, take care to make the volumes well, and the rest is just a training to retranscribe each detail and each particularity of the animal to obtain a realistic drawing. To achieve this mission, a set of pencils will be ideal to explore each texture, from fur to scales to feathers, but a hybrid graphics tablet can also save you from buying all this equipment, and take advantage of the power of graphics software for an even more realistic effect to your drawings.

How to learn to draw?

Learning to draw is a long process. Discover the tips to progress and learn drawing in a fun and motivating way!