Resources Review of the slate graphic tablet by ISKN

Review of the slate graphic tablet by ISKN

Digital drawing equipment can often be a hindrance for designers wishing to start digital art. Between tablets without screen, affordable, but difficult to handle because of the hand-eye coordination, and providing uneven results, or tablets with screen, more ergonomic, but often expensive and with mixed feelings of drawing, to be able to draw on paper, as on a sketchbook, while having the possibility of retouching his/her work on computer, became a necessity for all the traditional illustrators wishing to take the turn of the digital. It is in this perspective that ISKN has put all its technological know-how to create the Slate, and make the vision of digital drawing evolve. 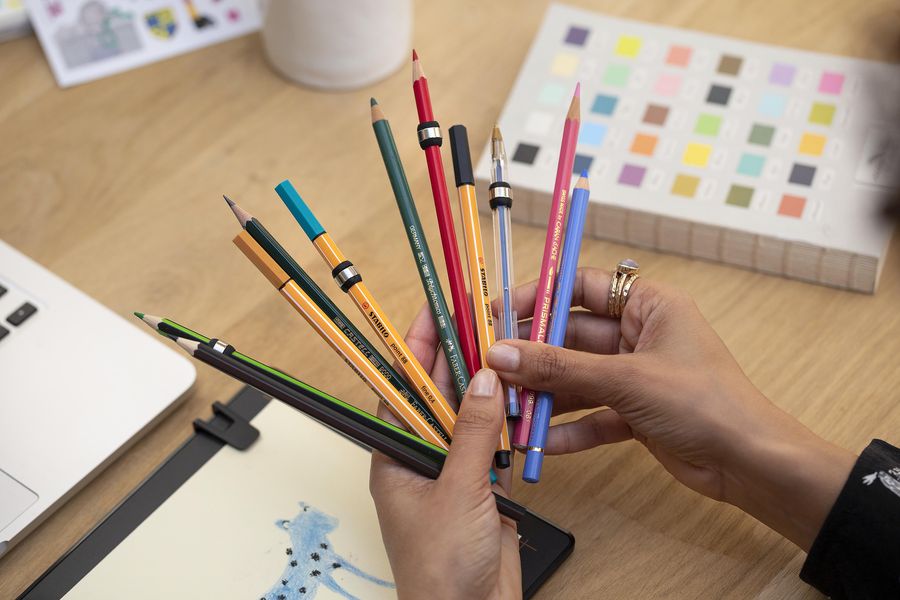 A short history of the Slate graphics tablet by ISKN

The Slate tablet comes from a simple idea: how to provide the traditional sketcher with a graphic device to draw sketches, with a grip as close as possible to classical drawing, and thus offering an easier access to the digital world. With this in mind, ISKN was created in 2014 as a start-up from LETI, the Electronics and Information Technology Laboratory, itself affiliated with the Grenoble Atomic Energy and Alternative Energy Commission. It is thanks to the expertise and experience of these organizations that the Slate project leaders were able to develop a patented technology, stemming directly from several decades of research on the use of magnetism in technology. As a result, in 2015, the first version of Slate by ISKN was made public and sold in stores. With the use of a hybrid tablet bridging the gap between digital and paper drawing achieving its initial successes, a second version of this graphics tablet, the even more powerful Slate 2, was able to be released in 2017. With a large part of its sales internationally, the Slate is at the origin of various projects, from drawing, to art in general, through handwritten note taking or calligraphy for example. Even more ambitious programs, such as partnerships with Beijing University and the Chinese Ministry of Education, or with the famous MoMa in New York, have allowed ISKN to take their technology to the four corners of the world. Today, ISKN and its Slate have conquered the United States and Asia with their innovations, but it doesn't stop there. With an ever-increasing amount of research and development work, the team of about 50 people has been able to create new and even more efficient peripherals for designers, beginners or not, graphic artists, and many other professions whose project is to synchronize the paper drawing and its reproduction on a computer screen at the same time, and thus benefit from the advantages of digital technology. Eventually, the technology used by ISKN with its Slate will enter the everyday life of users, and offer augmented interaction in many situations, from art to video games to more professional use. Translated with www.DeepL.com/Translator (free version) The Slate graphics tablet, an innovation in the digital drawing world

The genesis of the Slate: An observation

Until the appearance of the ISKN Slate, the illustrator, and even more so the beginner illustrator, only had the choice between a tablet without screen, not necessarily easy to handle, because of the hand-eye coordination, and a tablet with screen, allowing to visualize the stroke directly under the pen, and thus providing a greater comfort of use, but whose sensations of the digital pen, with fine or thick point, on the work surface, are not necessarily the most realistic. Also, the price of the graphic tablets with touch screen being much higher than the graphic tablets without screen, it becomes complicated for the users wishing to begin in the digital art, or for those wishing simply to digitize a handwritten note for example, to buy a touch tablet of this type, whose investment will be much too important for the use which they wish to make of it. What was missing on the market was a small graphics tablet, more ergonomic than the entry-level graphics tablets without screen, and with a better price-performance ratio and better sensations than the graphics tablets with screen. The idea of linking paper and a classic pen to a graphics tablet without a screen was therefore logical, and ISKN engineers came up with the idea of using the technology developed during their work at LETI in Grenoble, to offer a tool that would allow a sheet of paper to be placed directly on the work area and draw or take notes in handwriting, directly with a favorite pencil, while instantly reproducing the lines on compatible graphics software, under Windows and Mac OS, such as Adobe Photoshop or Illustrator among others, or even on iOS and Android apps.

But how does it work?

The operating principle of this hybrid graphic tablet is simple. Thanks to a system of magnetic sensors, installed in the body of the drawing area, and a magnet placed in a ring, itself to be positioned around the pencil, the graphic tablet can thus locate the movements and the inclination of the pen, and reproduce the drawing done identically on a computer. This innovative system, never seen before in the world of digital art, has made it possible to obtain an interactive object, and at a relatively low price for a precise and easy-to-handle graphics tablet. Moreover, thanks to its compatibility with laptops or desktop computers, as well as with smartphones and multimedia touch tablets, via a simple USB cable or Bluetooth, but also thanks to its battery life of more than 6 hours per charge, and its storage capacity offering to draw and save your drawings digitally without the need for a computer nearby, with the Slate, ISKN has proposed a versatile and innovative tablet that allows you to work at home or away from home, with all the benefits of graphic tablets without a screen, coupled with the ease of use of tablets with a screen and the comfort of drawing on paper. 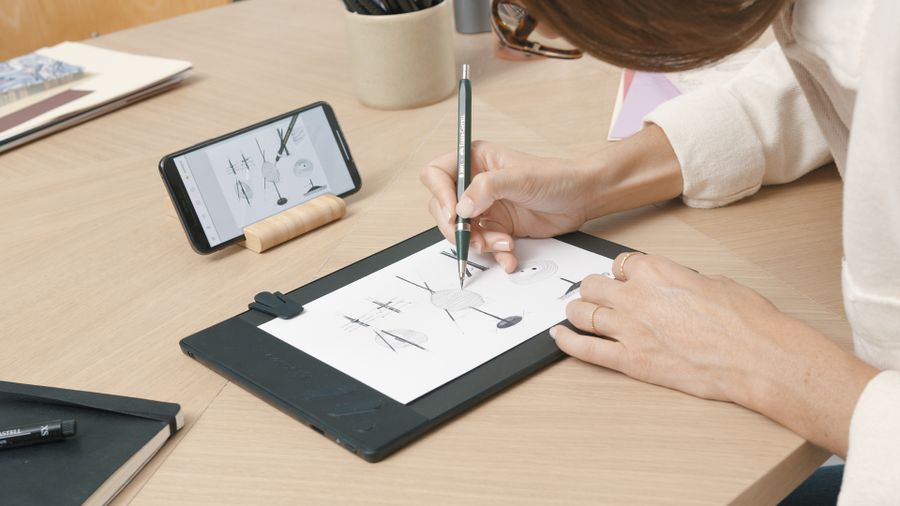 The Repaper graphics tablet: New features for a natural transition!

With the Slate, a new era has begun in the world of graphics tablets. It is in this spirit of continuity that ISKN has sought to provide even greater precision and improvement in hybrid "digital/paper" tablets, correcting the shortcomings of the Slate and improving its performance with the Slate 2, using the same technology as the original graphics tablet, but especially a few years later, in 2019, by developing the Repaper. While the Slate tablets relied all their accuracy on magnetic receivers and its magnet, coupled with an algorithm to determine the location of the pen, the Repaper has gone further by keeping this technology, but adding pressure sensitivity sensors, detecting 8,192 levels of sensitivity, on the drawing surface. This addition undoubtedly allows a much greater precision in the drawing, and a line always better retranscribed on the screen. Moreover, its ergonomics has been improved with its 5 buttons allowing to assign customizable shortcuts, and the calibration of the ring being done automatically, while the Slate required a manual intervention to perform this. The comparison doesn't end there, because while the Slate graphics tablet already offered more than enough internal memory for the vast majority of users with its 4 GB, the Repaper offers the addition of a microSD card leading to a storage capacity that can be extended to 32 GB. We could also mention an improved processor, increasing fluidity, a more modern Bluetooth connectivity technology, all without altering either the autonomy of the rechargeable battery, nor the dimensions and weight of the tablet, which will not even be 100 grams heavier for the new model, nor the price range, which remains accessible for anyone who wants to start digital drawing. If the Slate dusted off the graphic tablet environment, and was primarily intended for beginners in digital art and amateur use, the Repaper graphic tablet, thanks to its pressure levels and improved performance, will keep this characteristic thanks to the simplified handling, but will also be able to address professionals in graphic design, drawing, or photo editing, with its screenless mode for example. With this precision in mind, the Repaper comes with a plethora of accessories and pencils, including a Faber-Castell graphite pencil and its adapted magnetic ring, as well as a digital pen and 3 replacement leads, created especially for use with the Repaper tablet and to obtain the most precise and natural results possible in screenless mode for graphic work, retouching or note taking. As we have seen, the Slate revolutionized the world of graphics tablets thanks to a collection of patented technologies that have evolved and become ever more effective, until the development of the Repaper, which has become a real alternative to the classic mid-range and high-end tablets. This technology of magnetometers serving as position detectors for magnets still has a bright future ahead. This technology can easily bridge the gap between the digital and the real world and be used in a wide range of applications, not only to create new and ever more powerful graphics tablets, but also for video games or any other digital concept yet to be imagined.

When you want to start making digital drawings or retouching images on a regular basis, there is an indispensable tool in the daily life of a draftsman, illustrator, graphic artist or designer: the graphic tablet

Drawing with a graphic tablet: tips and tricks.

Digital drawing allows many possibilities and the drawing tablet has become a must-have.